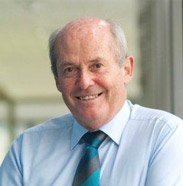 Professor Sir William Wakeham is Emeritus Professor of Engineering at the University of Southampton, Visiting Professor at Imperial College London, and Chair of the South East England Physics Network. He retired as Vice-Chancellor of the University of Southampton in September 2009 after eight years as its leader. From 1996 to 2001 he was Deputy Rector (Provost) of Imperial College London, where he served as a professor for 30 years. His academic publications include eight books and over 400 peer-reviewed papers in the field of transport processes and thermodynamics, and he has received awards for lifetime research achievements in the field from North America, Europe and Asia.

He has been a member of the UK Research Council and has conducted several science and HE policy reviews for the UK government and the European Union. He was awarded the President’s Medal of the Royal Academy of Engineering, where he is a Fellow, and was Senior Vice-President from 2011 to 2015 and its International Secretary from 2009 to 2015. He has chaired the South-East Network of Physics Departments, SEPnet, since 2009 and was Chair of Exeter Science Park from 2009 to 2020 and a non-executive director of Ilika plc until 2020. He was made a Knight Bachelor in 2009 for services to Chemical Engineering and Higher Education.