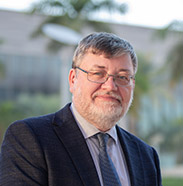 Professor Donal Bradley joined King Abdullah University of Science and Technology (KAUST) in April 2019 and is tasked with fostering excellence in the University’s research and supporting wide application of the resulting knowledge. His portfolio includes overseeing KAUST’s research funding, Core Labs and research infrastructure, Research Centers and initiatives, research support functions including regulatory requirements and compliance, strategic research partnerships, and research translation to fill the pipeline for innovation and economic development. Before moving to KAUST, Donal was Head of the Division of Mathematical, Physical and Life Sciences (Dean of Science and Engineering) at the University of Oxford. In that role, he oversaw the activities of ten departments comprising 700 faculty, 2,000 research and support staff and 5,500 students and led the establishment of the Oxford Suzhou Center for Advanced Research (OSCAR) in Jiangsu Province, China.

His research on soluble semiconductor materials physics and device engineering has been recognised by many prizes and awards, and he has more than 88,000 citations to his published works (h-index = 130). He is a co-inventor of conjugated polymer electroluminescence (1989) and a co-founder of Cambridge Display Technology Ltd (1990), now a wholly owned subsidiary of the Sumitomo Chemical Company. In 2001, he co-founded Molecular Vision Ltd to develop novel polymer detection systems for microanalysis applications, subsequently acquired by the Abingdon Health Group. Professor Bradley also served on the Board of Solar Press (UK) Ltd (2009–2016) and supported CSEM Brasil in establishing Sunew, companies set up to develop roll-to-roll printed solar cells. Most recently he is a co-founder and board member of PeroLED Ltd a display technology company that has been funded by the KAUST Innovation Fund to spin into KAUST. He also serves on the Board of Oxford Advanced Research Centers Ltd and is a Trustee and Committee Chair of the Rank Prize Funds.

Professor Bradley became a Fellow of the Royal Society (FRS) in 2004 and a Commander of the Order of the British Empire (CBE) in 2010 for services to science.