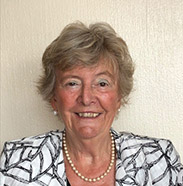 Julia Higgins is an Emeritus Professor of Polymer Science in the Department of Chemical Engineering in Imperial College, London where her research career has focused on the application of scattering techniques, notably neutron scattering, to the understanding of molecular structure and dynamics in large molecules (polymers). She is a Fellow of the Royal Society and of the Royal Academy of Engineering, Dame of the British Empire and Chevalier de la Legion d’Honneur.

Julia was Dean of City and Guilds College at Imperial College (1993–1997) and Principal of the Faculty of Engineering (2006–2007). She was the founding Chair of the Athena Project (1998–2003) and continues to support the careers of women in academic science as Patron of the Athena Swan awards.