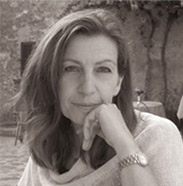 Sarah Gurr holds the Chair in Food Security at Exeter University. She studied at Imperial College of Science, Technology and Medicine (BSc, ARCS, DIC and PhD (Plant Pathology)), where she was awarded the Huxley Medal for her outstanding record of achievement.  She was a postdoctoral Fellow at St Andrews University and then an independent Royal Society University Research Fellow. She was appointed as Lecturer, then Reader and Professor at Oxford University, and is a Fellow of Somerville College.

Her interest is in plant disease, with particular emphasis on fungal infestations and in their global movement and control. Sarah has been invited to speak about this work all over the world – in plenary and keynote conference lectures, and on national and international radio. She has authored or co-authored over 170 publications, including 12 high-profile papers in science and nature journals, and contributed to the Government Foresight report on biological hazards. In 2019, she was listed among the most highly cited researchers worldwide (Clarivate Analytics).

Sarah was formerly President of the British Society of Plant Pathology and sat on the Council of the Biotechnology and Biosciences Research Council UK (BBSRC). She was recently appointed to the International Advisory Board at SLU University, Uppsala; as Advisor to the Scottish Government on Plant Health; elected to the Board of Trustees of The Rank Foundation; and as a member of Plant Heath Scotland (James Hutton Institute). Sarah held the Donder’s Chair (Honorary) at Utrecht University and was recently appointed as Visiting Professor at Utrecht. She was awarded the President’s Prize by the British Mycological Society and an Honorary Doctorate by SLU Uppsala. She is a Fellow of the Canadian Institute for Advanced Research, Fellow of American Academy of Microbiology, Senior Research Fellow at Somerville College, Oxford, Fellow of the Royal Botanic Gardens, Kew and the James Hutton Institute, Dundee (2020).

Her passion for plants and for raising public awareness of the plight of plants to disease has led her to speak at schools, U3A, ‘Science of Gardening’ lectures at Oxford Botanic Garden, charity fundraising events, and to write general ‘plant’ articles (RHS magazine and Country Life). She has had three gold-medal-winning displays at the Chelsea Flower Show on the science underpinning some aspects of plant biology, representing the Oxford Botanic Garden.