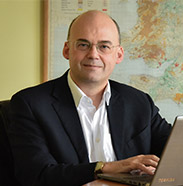 Michael Gooding graduated with a degree in Biological Sciences (Plant Biology) from the University of Birmingham in 1984 before completing a postgraduate diploma in Crop Protection, and then a PhD at Harper Adams. In 1988 he took up a postdoctoral position at the Sports Turf Research Institute before moving to the Royal Agricultural College, Cirencester as a lecturer in Crop Science and Agronomy in 1990. In 1996 Mike started 18 years at the University of Reading, firstly as a lecturer, then senior lecturer (2003), then professor (2010). Between 2014 and 2019 he was Professor of Crop Science at Aberystwyth University. Since then, Mike has had a brief role again at Cirencester and is currently an Honorary Professor at Aberystwyth.

During his career Mike has held significant positions in the management and development of research and researchers, most notably as Head of the School of Agriculture, Policy and Development, Reading (2008–2014) and as Director of the Institute of Biological, Environmental and Rural Sciences, Aberystwyth (2014–2018). His own research has focused on the improvement of wheat production with respect to sustainability, grain and flour quality, and interactions between genetics, environment and crop management. Approaches have involved different levels of plant and crop experimentation, statistical and mechanistic modelling, the use of genetic resources, and modern crop phenotyping technologies.

Mike has authored over 215 scientific publications, frequently with one or more of the 40 PhD students he has helped to supervise.  Two textbooks reflect his commitment to link food production with environmental sustainability, processing quality, and health of the consumer. Wheat Production and Utilization: Systems, Quality and the Environment was written with Paul Davies and published by CABI in 1997. Mike’s most recent publication is the textbook Wheat: Environment, Food and Health, written with Peter Shewry, due to be published by Wiley in 2021. Mike is a Fellow of the Royal Society of Biology, and is President Elect of the Association of Applied Biologists.