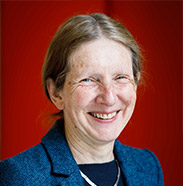 Ann Prentice is an Honorary Senior Visiting Fellow of the MRC Epidemiology Unit at the University of Cambridge. She is the former Director of the MRC Elsie Widdowson Laboratory (previously MRC Human Nutrition Research), Cambridge, and was Programme Leader of the MRC Nutrition and Bone Health Research Group, Cambridge, and Head of the Calcium, Vitamin D and Bone Health research team at MRC Unit The Gambia. Ann is a research scientist with a strong commitment to the translation of scientific evidence into policy and practice. She was Chair of the UK Scientific Advisory Committee from 2010 to 2020 and holds, or has held, other official positions and memberships of government committees, royal colleges and international agencies, research councils and universities, learned societies and research charities.

Her research is focused on lifecourse nutritional requirements for population health, with an emphasis on calcium and vitamin D, and encompasses the nutritional problems of both affluent and resource-limited societies. She has been involved in projects studying pregnant and lactating women, children, adolescents and older persons in the UK, the Gambia, Uganda, Malawi, Kenya, China, Bangladesh, India and South Africa. She has published >350 peer-reviewed articles, plus contributions to book chapters and government reports, the latter most notably in relation to her close involvement with the National Diet and Nutrition Survey since 1992.